Saturday the 20st of April 2013 is the day of the flower parade. The whole area is having a small party. Locals are sitting outside their houses watching parade and a lot of tourists are travelling through the area.
The parade will travel from Noordwijk to Haarlem and travels along the Keukenhof in Lisse around 15.45. See this website for more information. For a map and timetable see here.

This map indicates the route of the parade next to Keukenhof:

Travel as EARLY as possible! (Preferably opening time) Last year there was a big traffic jam to Keukenhof from 10AM. Even the roads the local people use are completely packed and there are no short cuts. (Locals are traveling only by bike on parade day!) If you are traveling after 9 AM be aware of the traffic jam it can take 2-3 hours one way to get from the train stations (Haarlem, Sassenheim, Hillegom, Leiden, Schiphol) by bus to the Keukenhof area! Taxis, (organized tour)busses and people traveling by car all use the same roads. Visiting the flower parade is a whole day event.

The Keukenhof is completely filled to capacity on this day. The parade is scheduled to travel by Keukenhof around 15.45 – 16.00. It is a slow moving parade and it takes around 45 – 60 mins. Most people are lining up 1 – 1,5 hours before and some people sit next to the roads all day. Bring snacks, drinks and something to sit on (like a plastic bag so you can sit on the grass/road/curb).

A lot of tourists are trying to leave immediately after the parade. Busses are lining up behind the parade and another traffic jam is created. (This solves around 18-19 hrs) It can take a couple of hours before you arrive at the train station, the public transportation busses, taxis are all in the same traffic jam. If you are done with Keukenhof than walk to the center of Lisse, shop around, have dinner and relax there before you take the bus back.

There are some alternatives

Ideally I think it is best to separate a visit to the Keukenhof and seeing the parade. Keukenhof is so packed on parade day that it isn’t fun anymore to walk through the park. (see the busy photos from 2011 here) If you like to see the parade and Keukenhof on one day, travel to Keukenhof early, rent a bike for the day, see the Keukenhof in the morning, have lunch in the lovely town of Lisse, see the flower fields and drive back to your hotel after 6 PM to avoid the biggest part of the traffic jam. And if you are planning to see the parade during your day in Keukenhof, get a stamp on your hand before exiting the Keukenhof. With the stamp and your ticket you can re-enter the Keukenhof on the same day.

Have a great flower parade day! 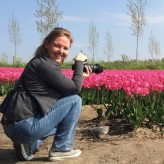 Tulips in Holland update #4 - Colorful inside Keukenhof, Yellow and Green outside!

Tulips in Holland update #5 - Tulips in the fields!