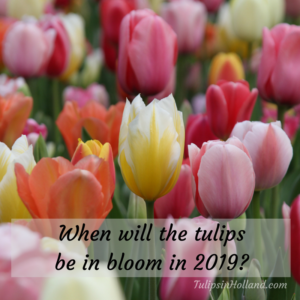 This is the single most asked question we get at TulipsinHolland. Followed by will the tulips bloom on date X?, when I am traveling to the Netherlands. It is also very difficult question to answer because every year the tulips will be in bloom on a different moment. It all depends on the temperature and rain during winter and springtime.

A cold winter and springtime can cause a later blooming and more slowly. And warm weather will cause the tulips to bloom earlier and faster. We have been monitoring the blooming of the tulips since 2010.

To give an example: in the beginning of April 2014 all the tulip fields were in bloom due to a warm winter and springtime. A year earlier in 2013 we had the tulips in the fields at the first week of May 2013. This is a difference of 4 weeks.Tulips are generally in bloom in the fields for three-week window.

Based on the last 10 years, the best chance to see tulips in bloom in the fields is the last two weeks of April. For visiting Keukenhof it is slightly different. Keukenhof plants its bulbs lasagna style (in layers) so from the start of blooming until the end of season you find flowers in bloom. Keep in mind that when you travel in early or late season (near opening and closing times) there are less flowers in bloom as during peak season.

Will 2019 be a early, normal or late springtime is hard to say. From the beginning of March we will have the weekly flower updates to provide you information about the blooming status of the spring flowers. Sign up here for this newsletter. The blooming normally starts with the crocus at the beginning of March, followed by the bright yellow of the Daffodils. Later on the hyacinths get in bloom and at last the tulips.

When you are interested to see what the current blooming status is, have a look here for the weekly flower updates.